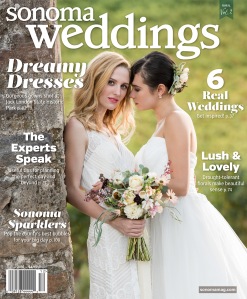 From 2015-2017, I was the editor in chief of that magazine’s sister publication, Sonoma Weddings.

For the 2015/2016 issue of the magazine, we celebrated the U.S. Supreme Court’s decision legalizing gay marriage across the country by representing a same-sex couple on our cover—a gorgeous image that garnered more than 250,000 Facebook views and more than 3,000 likes and shares. Our cover models also romped around Beauty Ranch, Jack London’s 1,400-acre ranch (now a state park) in Glen Ellen, for a gown feature that paid homage to both bridal fashion and London’s literary legacy. Another favorite feature looked at the use of drought-tolerant florals to create breathtaking centerpieces and bouquets.

Sonoma Weddings was a nominee for the Western Publishing Association’s 2016 MAGGIE award for best annual publication.

“Bringing Blair aboard to helm the second issue of Sonoma Weddings was a great decision. Blair immediately understood the tone and tenor of what the publication should be and launched into making the magazine a success, hitting all deadlines, bringing in writers, photographers, stylists and models, running photo shoots, editing and writing and providing incredible project management skills. Her drive and willingness to go above and beyond makes Blair a vital team member on any project.”

I’m an editor specializing in the creation and management of print and digital publications. I also blog at TheHomeGlass.net.

The home page of this site features recent projects; feel free to get in touch to learn more.